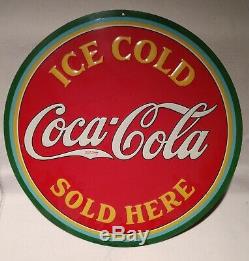 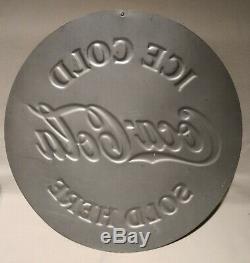 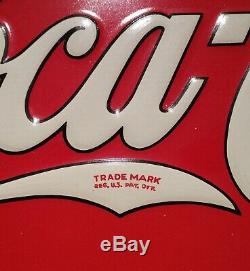 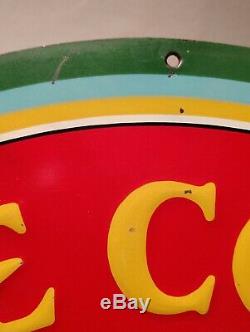 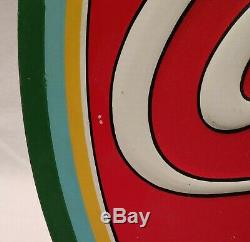 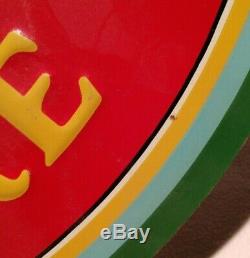 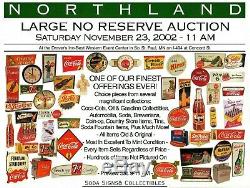 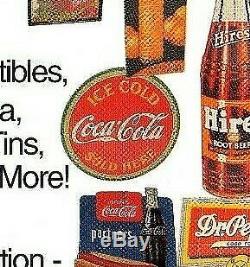 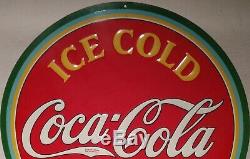 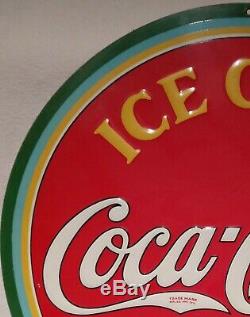 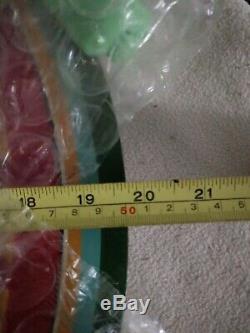 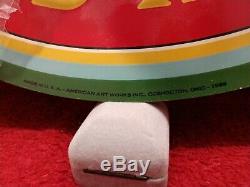 It has a few very minor scrapes that Ive photographed (see pictures). Originally, I had it listed as NOS thinking it was original, but a while later I was informed by an old time collector who had one years ago that corrected me stating that this particular sign originally.

Have mounting holes added during manufacturing. He said the Petretti's. Soda book shows the sign without holes. Those of you who have the book can confirm it.

I'm listing it as Used. Sorry, Folks, for the inaccuracy.

The sign is still as close as you're going to get to New. Check for my other listings. The original correction about the sign from the old time collector who said the mounting hole at the top was not done by the factory. I wasn't aware that they originally were made without mounting holes. Is there a Coke book that shows these signs and how they were originally made? I know that to mount a round sign correctly so it displays properly, the hole at the top must be located exactly 90 degrees from the horizontal lettering. I did import the picture into Photoshop and using their cropping tool first cropped it in half underneath Coca-Cola so that it was lined up horizontally with the bottom of the lettering as best I could. Then I cropped it again into a quarter and the vertical edge of the cropping line intersected the mounting hole.

I think it's pretty close to being in the right place at the top. Attached are the two cropped photos of the one in the listing.

I'm also going to post them with the listing. Please let me know what Coke reference book illustrates this sign and shows all the detail. I forgot to add to the reply that there was no paint loss around the hole and it appears like it was cleanly punched like a factory might do. I unwrapped the sign and took pictures of it with a measuring tape. I would call it just slightly less than 19-3/4", closer to 19-3/4" than 19-1/2.

Also, upon closer inspection at the bottom I found the maker and date marks. I posted earlier there was no paint loss around the punched hole, but after looking closely with a magnifying glass, I believe there is some loss in the hole.

I cant say that means the hole was punched after it was made or the loss came from hanging the sign in the museum and displaying it. Also, through correspondence with other collectors, I found that some of them had seen this sign with and without holes which makes me believe the first batch produced may not have had any, but since theyre necessary for hanging, it would make sense to add one or more to aid the store and subsequent batches made might have been made with them.

That is not confirmed, just a guess. The item "1933 Coca-Cola Ice Cold Sold Here round, embossed, painted metal sign" is in sale since Sunday, April 19, 2020. This item is in the category "Collectibles\Advertising\Soda\Coca-Cola\Signs". The seller is "509smith" and is located in Richland Center, Wisconsin.